Email "Medical" or "Hospital" or "Funeral" or "Insurance" and your Full Name, age and Cell No. to: [email protected]
or, just Click Here to fill in the relevant form and we will call you. Thank You.
Posted on March 16, 2020 Leave a comment

The Chinese coronavirus which is spreading from China, is looking like it could be an actual pandemic, that circles the globe, according to many of the world’s leading infectious disease experts. Rapidly rising caseloads are alarming researchers, who fear the virus may make its way across the globe. But scientists cannot yet predict how many deaths may result.

To be an official Pandemic, it needs ot be an ongoing epidemic on two or more continents which may well have global consequences. Despite the supposed quick and decisive action by China and the extraordinary travel restrictions and quarantines now imposed by China and other countries, including Russia and the United States.

Many experts agree that if any continent is to become the second one, to make it a Pandemic, it would be Africa, as it is the coronavirus’ most vulnerable target. Over 1 Million expatriate Chinese work there, mostly on mining, drilling, retail or engineering projects. Also, many Africans work and study in China and other countries where the virus has been found.

It is quite possible that some in Africa already have the virus, and if anyone on the continent has the virus now, “I’m not sure the diagnostic systems are in place to detect it,” said Dr. Daniel Bausch, the head of scientific programs for the American Society of Tropical Medicine and Hygiene, who is consulting with the World Health Organisation (WHO) on the coronavirus spread.

At least six African countries including neighboring Botswana and Angola, have suspected cases quarantined, according to The South China Morning Post. They sent samples to France, Germany, India and South Africa for testing. South Africa and Senegal could possibly diagnose it, he said. However Nigeria and some other countries have already asked the W.H.O. for the genetic materials and training they need to perform diagnostic tests, but that will take time and the virus seems to have a gestation period of 2 weeks, making Africa a ticking time bomb.

Even if Africa learns rapidly how to diagnose it, there is little they can do to treat it, much less cope with the huge numbers of cases that China is experiencing, so in all likelihood it will just run its course, which could be catastrophic. Of course we do not know if the virus can even survive in the temperate climate of Africa. There are many unknowns at this stage. However, at the end of the day, simple basic hygiene, something which is lacking in Africa, despite our best efforts, can make a huge difference.

But various epidemiological models estimate that the real number of cases is 100,000 or even more. While that expansion is not as rapid as that of flu or measles, it is an enormous leap beyond what virologists saw when SARS and MERS emerged. Given that the figures from China are from a Communist regime, whose reputation is of utmost importance, many are trying to make alternative guesstimates. If we take for instance that 1% of those that have left Chine to go back to their home countries, have the virus, then 1% of Wuhan’s population of 11 Million, is 110,000 people infected! The current figures from China claim only 21,000 potential cases…

We have seen videos of people queuing three city blocks at the Wuhan hospital to be tested, and many have not even left their homes to be tested, so the figures from China could still be premature and conservative.

It seems unlikely that the virus will spread widely in civilised countries which have robust, alert public health systems, said Dr. William Schaffner, from Vanderbilt University Medical Center. Any patient in these countries who presents with fever or respiratory problems will get asked two questions. “Have you been to China or have you had contact with anyone who has?” If the answer is yes, they’ll be put in isolation right away.

Scientists do not yet know how lethal the new coronavirus is, so there is great uncertainty about how much damage a pandemic might cause. But there is growing consensus that the pathogen is readily transmitted between humans, as the Chinese coronavirus is spreading more like flu, which is highly transmissible, than like its slow-moving viral cousins, SARS and MERS, scientists have discovered.

“It’s very, very transmissible, and it almost certainly is going to be a pandemic,” said Dr. Anthony S. Fauci, director of the National Institute of Allergy and Infectious Disease. “But will it be catastrophic? I don’t know.”

In the last three weeks, the number of lab-confirmed cases has soared from about 50 in China to 17,500 in 23 countries; there have been over 362 deaths, all but one in China. This could jump however also be attributed to the increased availability of testing. 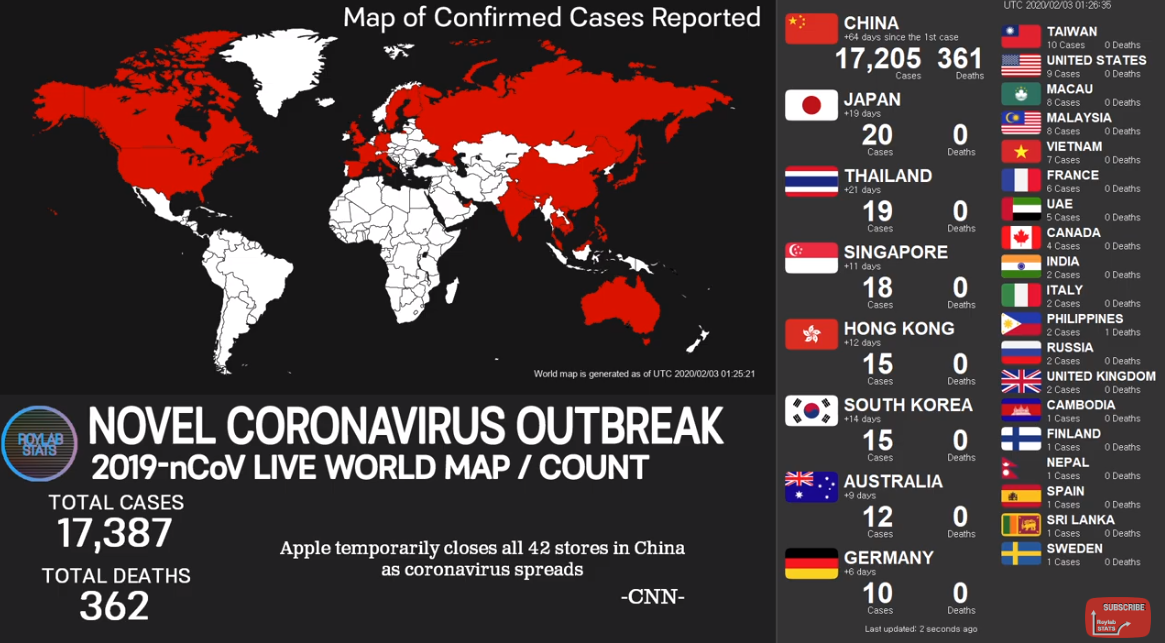 If the virus does spread globally, tourism and trade with countries besides China may be affected and the urgency to find ways to halt the virus and prevent deaths will grow. Today the Chinese Stock Exchange re-opens for the first time since 23rd January when their Chinese New Year holidays commenced, so a shock is almost guaranteed.

When SARS was vanquished in July 2003 after spreading for nine months, only 8,098 cases had been confirmed. MERS has been circulating since 2012, but there have been only about 2,500 known cases.

The biggest uncertainty now, experts said, is how many people around the world will die. SARS killed about 10 percent of those who got it, and MERS now kills about one of three, but those stats were derived after the event. We cannot estimate how many will die with Coronavirus because we do not know how many are infected.

The 1918 “Spanish flu” killed only about 2.5 percent of its victims whilst the mortality rate for known cases of the Chinese coronavirus has been running at about 2 percent, although that is likely to drop as more tests are done and more mild cases are found.

The effects of a pandemic would probably be harsher in some countries in Africa than in other more civilised ones. While the USA and other civilised countries may be able to detect and quarantine the first carriers, countries with fragile health care systems will not. The virus has already reached over 23 countries including France, Spain, Cambodia, India, Malaysia, Nepal, the Philippines and Russia.

See also: Corona virus spreads dramatically &#8211; How long before it reaches South Africa and will the ANC regime be able to curb it ?