Email "Medical" or "Hospital" or "Funeral" or "Insurance" and your Full Name, age and Cell No. to: [email protected]
or, just Click Here to fill in the relevant form and we will call you. Thank You.
Posted on March 15, 2020 Leave a comment

It used to be that South Africa was The Gateway To Africa, now SA is Africa’s Gateway to the West! The South African Human Rights Commission (SAHRC) is considering legal action and has decided to withdraw from any further engagements with a militant group of foreign illegal migrants, who are literally turning Cape Town’s CBD into a sh*thole, on unrealistic dreams of being sent to Canada!
A previous application was heard earlier this week in the High Court to stop the foreigners from littering, making fires on the pavement, urinating and defecating in public! A ruling is due on the 17th of next month.
The fake “refugee” situation in Cape Town’s CBD has taken another bad turn with the  Western Cape Human Rights Commissioner, Chris Nissen  laying a charge of intimidation against “refugee” leader JP Balous. Nissen claims that Balous threatened to kill him earlier this week! The SAHRC has since withdrawn its assistance to the refugees. Late last year Nissen and other leaders were also attacked by the foreigners when they tried to help them inside the central Methodist Church, a Greenmarket school.
The militant “refugee” leader, JP Balous, has already got eight cases of assault against him. According to Nissen, he has also apparently got some court protection orders against him, to protect others. Nissen says if a person of such a nature then says “I’m going to kill you”, then you have to take it seriously.
Nissen had been playing a mediating role between the occupying foreigners and the City of Cape Town and the Home Affairs Department.  The migrants obviously came to SA because South Africa is a well known route for asylum in the soft touch West. In fact legal South African passports are easily bought from Home Affairs for R45,000! Therefore if they want to leave South Africa and claim asylum elsewhere, they have to create conditions which will make it appear that they are unsafe! Could this be why “xenophobia” is so hyped up in SA by the globalists? However, according to the UNHCR, South Africa is a safe country, so why are migrants being allowed to pass through and pick and choose where they want to go claim asylum in the West?
Nissen told SABC News he thinks the foreigners should be reintegrated into local communities. He said some of them still have their houses. The father is at home while the mother is protesting! Nissen says  there are people that really are destitute but that came here with this wonderful but false dream of getting into a plane and off they go to Canada! That’s not going to happen and SAHCR have told them that on that day and that has been their consistent message to them. However they choose to ignore this and it would not be surprising if George Soros had his operatives there, egging the migrants on…
The foreigners have been housed in the church since October last year. The South African Human Rights Commission says the death threats  represent an attack on a person’s dignity and integrity. 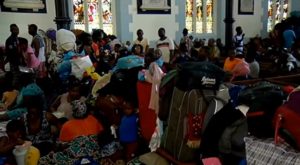 Central Methodist Church, at Greenmarket
See also: Counterfeit South African Passports Are Big Business as Other Africans Use South Africa and it&#8217;s Passport as a Gateway to Claim Asylum in Ireland &#038; UK